Best oil according to Stiftung Warentest in Germany

Do you know what is a biodynamic oil ?  And it’s organoleptic and health benefits? Castillo de Canena, winner of the Stiftung Warentest 2018 and considered the best oil in the world by the prestigious guide Flos Olei, presents for it´s first time his Demeter Biodynamic oil Arbequina variety at the Biofach fair that will take place from February 14 to 17 in Nuremberg. See you there!

In addition, our Family Reserve Picual won the lead position in the prestigious German publication Der Feinschmecker in 2016, in which hundreds of oils from all around the world are involved.

Furthermore, our Family Reserve Picual has been chosen as the best oil in Germany by the Stiftung Warentest. An organization that although is created by the German State, it works in a total independent way. In fact, their tests are carried out in different areas (food, electronics, finance, etc.) and have the prestige and respect of all German consumers. 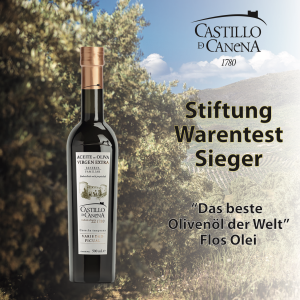 This January 2018, Stiftung Warentest has published a test on all EVOO’s that can be found in the German market. After extensive analysis with high parameters of  thoroughness that even surpass those that in producing countries are demanded, the conclusion of the Stiftung Warentest is that Castillo de Canena Family Reserve Picual EVOO has achieved the highest score and our EVOO is been recommended by that organism.

Also our Family Reserve Picual has achieved again this year the maximum score in the prestigious Italian oil guide Flos Olei, being named in 2018 the BEST OIL IN THE WORLD.

Moreover, as every year we have the confidence of the most prestigious chef’s  in the world and lovers of haute cuisine.

In Germany you can find our oils in places such as KaDeWe in Berlin, Feinkost Kaefer in Münich, Kaufhof nationally …

Therefore, according to the influential German organization, the Picual Family Reserve of Castillo de Canena is the best extra virgin olive oil that you can buy in Germany.  A flagship product for the Andalusian company scoring highest in the sensory and chemical test (both in taste and smell), being “an extra virgin olive oil of the highest quality”.

The rigorous analysis carried out by the German consumer organization measures all variables related to each extra virgin olive oil, such as the sensory and chemical quality, the presence of contaminants – pesticides, solvents, mineral oils, etc., and even the packaging, among others.

A specialized tasting panel accredited by the International Olive Council performed the sensory test.  Moreover, different parameters were chemically analysed such as the composition of fatty acids, triglycerides, diglycerides, etc., calculating the Totox value (whole oxidation) to estimate the freshness of the oil.  In addition, analyses were made to detect the presence of pollutants in each product.

Among the group of experts is Dieter Oberg, one of Germany’s most experienced olive oil testers who inspect over 500 olive oils per year; and it is officially accredited by the International Olive Council.

Further, Dieter Oberg is head of the German Olive Oil Panel (Deutschen Olivenöl Panel); the only sensory panel approved by the German Ministry of Consumer Protection (Verbraucherschutz – Ministerium NRW) for official samples and authorized panel of the European Union.

“Obviously the samples examined are anonymous, bearing no brand or indication of origin.  For the analyses, the oils are heated to 28 degrees Celsius (the best temperature for obtaining full aromatic spectrum) and are tasted from a blue glass bowl with a lid (so that its colour does not influence us, as this tells us nothing about the quality)” explained the German expert.

As Oberg asserted, “first I appraise the smell and then the taste: fruity, bitter and spicy.  Then I make a written note of the intensity and balance of these attributes, as well as the shortcomings.  At least eight testers do this same process with each of the oils”.

For Rosa Vañó, Marketing and Communications Director at Castillo de Canena, “we are proud that our Picual Family Reserve has been chosen by the prestigious organisation Stiftung Warentest as best extra virgin olive oil sold in Germany.  For us, this constitutes recognition of all the personal efforts we take in producing our extra virgin olive oils with the highest standards of quality, right from tending to the olive trees to the moment the olive oil reaches the consumer”.

Castillo de Canena extra virgin olive oils can be purchased at places as prestigious as KaDeWe in Berlin, Feinkost Käfer in Munich and Kaufhof branches nationwide, among others.

Stiftung Warentest purchases all products at supermarkets and specialty stores (not via the internet) anonymously just like a consumer – unbeknownst to producers or importers -, then analyses them using scientific methods at independent institutes.

The results have a huge influence on the purchase behaviour of German consumers, owing to its reputable standing, independence and trustworthiness.

Founded in 1964 by the Bundestag, the consumers organization Stiftung Warentest provides German consumers target support through its extensive comparative testing of goods and services.  Its top priority is neutrality, and cannot, for example, receive advertising revenue.  Since its inception, it has analysed over 100,000 products and services.

Any additional information you may need, do not hesitate to contact us! We are always available at info@castillodecanena.com. Thanks for your support!