Castillo de Canena launches a new concept in the world of premium extra virgin olive oils: 21st Century Oils, innovative oils which will stand out for their originality and particularity. They are born in the 21st Century and prove that at more than 3,000 years old, olive oil is still the vanguard of modernity and creativity.

Our aim is to create a collection of oils that will represent different concepts, different values and new ways to enjoy extra virgin olive oils. The first launch under this concept of XXI CENTURY OILS is the ‘EARLY ROYAL’, the oil that begins our saga. 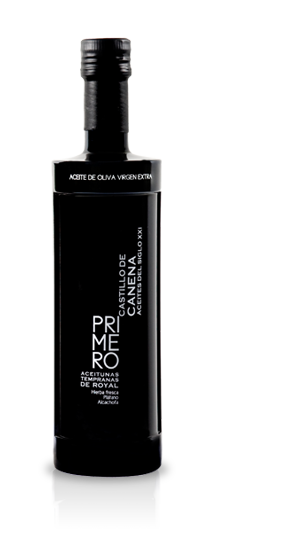 The “Royal‟ varietal is an ancient variety native to Jaén, Andalucía. Its crop has suffered a strong decline since the end of the 19th century and was on the brink of extinction due to the difficulties in harvesting and its low yield leading many to abandon it. Only a few Royal oils were harvested, all of which were exclusively reserved as soon as the olives ripened.

We have rescued the Royal from a small enclave in the mountains and have planted them in our estate, taking every care of the Royal olive trees and we are now able to present our new oil.

FIRST-EARLY ROYAL is taken early harvest, when it is most difficult to crop, but when the olives have the most flavour and aroma. That is why the name of our oil is EARLY ROYAL, our first XXI Century Oil.

Early Royal is presented in an original black bottle with white xerography in which the taste of the oil is uniquely included: “artichoke, green banana and fresh grass”. This will help lovers of extra virgin olive oils recognize the extraordinary flavors of one of the most ancient, scant and rare varieties in the world.