In its ongoing pursuit of excellence, Castillo de Canena, a leader in the field of haute cuisine that produces some of the finest extra-virgin olive oils in the world, now launches its iconic limited edition First Day of Harvest for the twelfth year in a row.  This product is anxiously awaited through out the year; it is a pioneer in its category and stands out among other high-quality oils for the care taken in its creation, its special aroma, flavor and quality.

To obtain these prized extra-virgin olive oils, Castillo de Canena works with precision agriculture. Using cutting-edge technology, the company can scientifically supervise the physiological situation of its olive trees in real time, and respond to their needs through out the seasons. Precision agriculture also permits the company to determine the exact day uponwhich to begin the harvest of each varietal, not a minute too late or too soon for optimal ripeness. 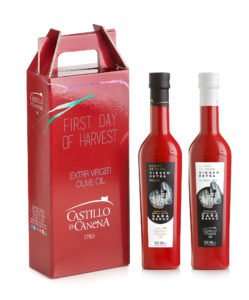 As in each of the previous editions, a key figure from the arts, sciences or the world of sport—and an appreciator of fine olive oil—has been charged with designing thelabel for this product’s iconic cherry-red bottles. Previous editions have been designed by personalities  like Sara Navarro, Enrique Ponce, Joaquín Berao, Ainhoa Arteta, Manolo Valdés, Pau Gasol, Alejandro Sanz, Fernando Alonso, Roberto Verino, Raphael and Alex de la Iglesia.

This year, the flamenco dancer Sara Baras has created the new label, which despicts a moment of dance in one of her performances. “I feel truly proud to sponsor this new edition of First Day of Harvest by Castillo de Canena, a company with which I feel closely identified. Flamenco and extra virgin olive oil are important elements of our culture, prime examples of the Spanish cultural heritage that express some of what we are to people around the world,” the artist says.

In addition, the dancer and choreographer has highlighted the good work of the olive-grower, explaining that “Castillo de Canena is committed to excellence, to doing things right. Like in the art of flamenco, the key elements are purity, honesty and spirit. Just as in dance, tradition isbest served by conserving the freedom to show your own character, to be your own voice.”

Sara Baras is one of our most widely known dancers and choreographers, and her work has received numerous awards. Her company has performed over 4000 times in some of the world’s greatest theaters, making her a well-known ambassador of our culture.

The dancer, originally from Cádiz, has captivated audiences in venues as prestigious as the Sydney Opera House, the Royal Albert Hall in London, the Théâtre des Champs-Elysées in Paris, the State Kremlin Palace in Moscow, the Teatro Real in Madrid, the Gran Teatre del Liceu in Barcelona, the Bunkamura Theater in Tokyo, the Great Theater of Shanghai, the City Center in New York, the Kennedy Center in Washington, the Teatro de Bellas Artes in Mexico City and the Teatro de la Ópera in Buenos Aires, among many others. 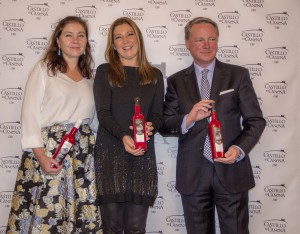 In addition to being named an “Honorary Ambassador of the Spain Brand” in the field of Culture and Communication, Sara Baras has been granted many honors, among them the John F. Kennedy Center for the Performing Arts “Gold Medal in the Arts” awarded in Madrid by His Majesty Juan Carlos I,the “Award for a Life Dedicated to Dance” given at the 40th anniversary of the Corral de la Pacheca, orthe “Galileo 2000 Award” for a lifetime of dance, given by the city of Florence through the Agenzia Generale di Firenze.

First Day of Harvest is the extraordinary result of a wholeyear of effort on the part of the farmer, and an homage to the mystique of the very first pressing of the harvest, with all its magic and joy.

“Only someone that perceives the magic and the beauty of the olive tree and its environment, and that understands the effort and attention that the harvester lavishes upon his orchards year after year in order to achieve the most fragrant, complex and balanced olive juices, is capable of expressing—in the limited space of a label—a synthesis of all the emotions and passions that characterize the special day on which the first olives are harvested,” affirms Rosa Vañó, Director of Marketing and Sales for Castilla de Canena.  According to Rosa Vañó, “Ever since the idea for the First Day of Harvest line took  shape in 2006, we have always made sure that the individuals we invite to design the labels of these special bottles share our values of excellence, perseverance and commitment to good work. Sara Baras has been exhibiting her art and her talent on the world’s stages for over thirty years, pouring passion and devotion into her work.” The best olives in the world, at the optimal moment of ripeness Castillo de Canena takes great care with the whole process of selection of the very best olives of the Arbequina and Picual varietals, and harvest them at exactly the right moment. “We make use of precision agriculture, through which we now analyze more than twenty parameters, to know exactly the day on which the fruit reaches its ideal degree of ripeness. This allows us to begin the harvest of each varietal on exactly the right day, not a moment too early or too late,” says Francisco Vañó, General Director of Castillo de Canena. He specifies, “This year, we began harvesting the Arbequina olives first, then the Royal ones, and lastly the Picual ones.” This year, like the others before it, the selected olives are harvested by night in order to be able to gather them in more quickly, and to take advantage of the lower temperatures. Both of these parameters are essential in achieving truly excelsior extra virgin olive oils. 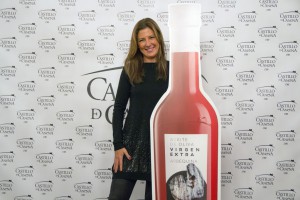 “This year we have continued to use a cold chain, maintained from the moment of harvest to the moment the extra virgin olive oils are bottled. This represents a great step forward in combatting temperature increases during the harvest,” states the General Director of Castillo de Canena.

The First day of Harvest Arbequino is a dense oil, with a pale green color, a complex and balanced profile, and a distinct green olive fruitiness in the nose and the mouth. It suggests a whole range of herbal aromas, especially green grass, almond and artichoke. The feel in the mouth is of almondwithgreenapple, banana skin and a slight touch of black pepper. Itis notable for its sweetness, with a slight astringency and great persistence in the palate.

The First Day of Harvest Picual is an intensely green and powerful oil, with an intense fresh fruitiness and touches of green grass, green almond and aromatic herbs (thyme, rosemary). It moves through the mouth, soft at first, with moderate and balanced bitterness and piquancy, and an aftertaste of almond, artichoke, tomato leaves and apple. As Francisco Vañó has pointed out, “First Day of Harvest—both Arbequino and Picual—are powerful oils that come from specially selected orchards. They have a lot of personality, excellent sensorial qualities, and extraordinary fragrance: harmonious and very elegant.”

This twelfth edition of Castillo de Canena’s First Day of Harvest line will be present in over 50 countries—principally in Europe, the United States, Latin America, Japan and Australia—consolidating its reputation as one of the best extra virgin olive oils in the world, thanks to the constant recognition it has enjoyed.