A study on olive oil enriched with antioxidants derived from micro-algae is awarded the Castillo de Canena “Luis Vañó” Prize for Research in the Field of Olive Oil Production.

In addition to the first prize of 6,000€, a second prize of  1,500€ will be presented to a study on a new system for spraying pesticides. 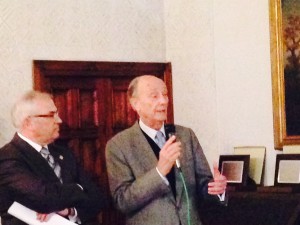 Today the company Castillo de Canena, in the family home of the same name, will award the Luis Vañó Prize for Research in the Field of Olive Oil Production.  In this second edition of the Prize, the winning project is a study on olive oils enriched with antioxidants derived from micro-algae.

The next edition of this Prize which will be held in 2015 (the Prize is biannual), will include the participation not only of the University of Jaén but also the support of the University of California UC-Davis, one of the world’s great agricultural research centers. Through this new agreement, the Prize will take on an international perspective; the call for participation will be issued in the United States, Spain and in other countries. 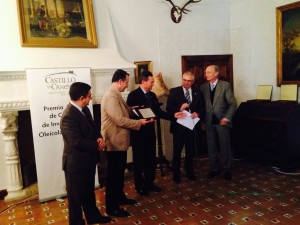 “We hope to endow the Prize with a more global focus, in line with the philosophy of our company which — since its founding — has had a strong international commitment. This collaboration with UC-Davis seemed the best choice for us, as it is one of the world’s most prestigious universities in the study of olive trees and the olive oil sector, and it already has a strong history of collaboration with the University of Jaén” explained Francisco Vañó, the manager of Castillo de Canena.

The winning study in this year’s edition of the Prize allows us to hope that by enriching virgin olive oils with lutein, the habitual consumption of these oils might become an effective means of preventing degenerative eye diseases. The researchers derived the lutein from the cultivated micro-algae Scenedesmus Almeriensis which naturally produce the carotene, which is also present—albeit in minimal quantities— in Extra Virgin Olive Oils.

The research carried out by the professors Ruperto Bermejo, Francisco Gabriel Acién Fernández and José María Fernández will recieve 6,000€ in prize money as well as a commemorative plaque and the publication of their work. 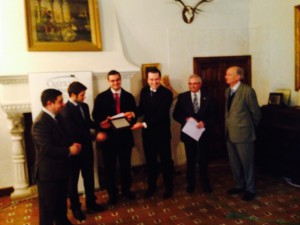 The Castillo de Canena Luis Vañó Prize for Research in the Field of Olive Oil Production also includes a second prize, which has been awarded to the study “High Efficiency Assisted Air Spraying for the Application of Pesticides”.  This work introduces a new prototype which acts as a pantograph arm, applying a fine spray of pesticide to leaf surfaces in a much more rational and precise manner, avoiding product loss and thus both saving expenses and more fully respecting the environment. This research was carried out by the professors Elias López, Juan Antonio Almazán and Francisco Alberto Díaz. The second prize is endowed with 1,500€ as well as a commemorative plaque and the publication of the work, which will also be funded by the Castillo de Canena company.

“With the second edition of this Prize for Research we want to publicly reaffirm our corporate commitment to society, to the olive oil producing sector, and to Extra Virgin Olive Oils, so important in our region, Jaén. In this time of economic difficulties is when companies should step forward and support research, innovation and good management of knowledge even more strongly, as these are valid and effective tools for overcoming the difficulties and the crisis which we have been facing over recent years”, explained Luis Vañó, the President of the Group.

Castillo de Canena has an olive growing tradition dating back to 1780. The family personally controls all the steps in the process of oil-making, from the field to the press, bottling and domestic and international marketing. The oil is presently exported to 42 countries.

The decision of the jury, which was presided over by the Rector, Dr. Manuel Parras Rosa, and made up of outstanding individuals in the field of olive cultivation and of EVOOs, such as Dra. Anunicación Carpio Dueñas, Mrs. Mariela Chova Martínez, Dr. José Juan Gaforio Martínez, Dr. Carlos Parra López and Dr. Joan Tous Martí, was made public on December 10th, 2013.

The company was just given the highest possible score (98 out of 98 points) in the FlosOlei 2014 Guide, a guide published annually by the Italian Marco Oreggia in which he ranks the finest oils in the world.  He designates the Royal Temprano by Castillo de Canena as the Best Single-Varietal Light Fruity Olive Oil in the World. The company also received the Foods of Spain Award just two months ago, as the best food and agriculture company in the country in terms of international reach.