In the magazine SCANDINAVIAN FOOD & DRINK

Castillo de Canena is among the most recognizable producers of Extra Virgin Olive Oil in Spain, and their Oils are considered being among the 5 best Spanish Oils in the World.
Production is located in Jaen-Provence, in Andalusia, which is the Worlds biggest area producing Olive Oils, however only recently they started focusing on Quality.

Castillo de Canena are focusing on quality in both when it comes to the Oils and design. The beautiful red bottles with 1st. Day Harvest is made only from olives that have been collected the very first day of Harvest. The label is every year new and designed by a famous personality, this year by the Formula 1 Driver Fernando Alonso. To the left the Reserva Familiar oil, which have obtained the highest possible score by the Oliver Oli Guide Flos Olei, and in the beautiful Turquoise bottle you find a new creation: An Oak Tree smoked Olive Oil produced from 100% Arbequina Olives.

Oliver Trees are covering 2/3 of the agriculture area in the Jaen-Provence, which is also called the Olive Oils Mainland. We are in the Southern part of Spain in the North Eastern part of Andalusia, which it the biggest Olive Oil producing area in the World. However the area have never been know for quality.

As a matter of fact Spain have for a long time been lacking behind when it comes to production of quality Oils. But during the recent years when a large number of Spanish Michelin – Chefs have set new international standards, the attention on the Countries liquid Gold also been increased.

The new elite with the old traditions 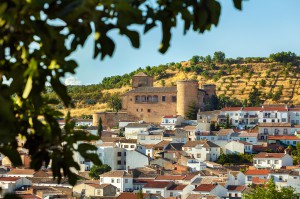 ons to generation, and today it is the brother and sister Paco and Rosa Vano who are carr

ying on the traditions, and they are doing this in their own way.

They are both highly educated and have both had successful careers from the Banking sector to Global Marketing Manager for Coca Cola, and the experience the both process they have carried into the family company for which they both are responsible for today.

From the very beginning the only parameter Paco and Rosa have had was Quality, and they have both been involved in all the processes related to the production of their quality Oils, and that goes all the way from the growing process, selection of Olivers, pressing and tapping. And not to forget the Design of the Bottles, Sales and Marketing.

And their engagement and innovative thoughts have given result. At the Ecologic Exhibition Biofach in Germany this year they launched a Biodynamic Extra Virgin Olive Oil, which now also is available in Denmark, and recently is also the Oak Smoked Olive Oil produced from 100% Arbequina-Olives added to the assortment available in Denmark.

More of Castillo De Canena’s Extra Virgin Oliver Oils are based on classic Olives like Picual and Arbequina, but Paco and Rosa have also re-discovered the Royal which is a local Olive from the Jaen region, which was close to disappear, and today only grow very few places in Andalusia.

Thanks to Paco and Rosa the Royal Olive is again an honored Olive and is one of the main Olives in another of their price winning Oils.

So its clear that the drops are golden, and so is the future for Paco and Rosa Vano. 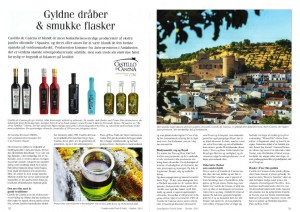