Just as the world’s most prestigious guide to extra virgin olive oils, Flos Olei, has once again given Castillo de Canena the highest ranking possible, Castillo de Canena presents the 14th annual limited edition of its exclusive First Day of Harvest collection, this year designed by the actor Juan Echanove 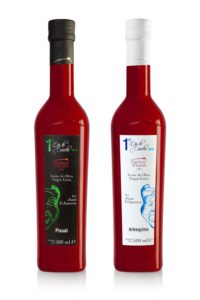 In its ongoing pursuit of excellence, Castillo de Canena, a leader in the field of haute cuisine that produces some of the finest extra virgin olive oils in the world, now launches this 14th annual limited edition of its iconic First Day of Harvest oil. This product is anxiously awaited throughout the year. A pioneer in its category, it stands out among top-shelf oils for the care with which it is obtained as well as its aroma, flavour and quality.

To obtain these prized extra-virgin olive oils, Castillo de Canena works with precision agriculture. Using cutting-edge technology, the company can scientifically supervise the physiological status of its olive trees in real time, and respond to their needs throughout the seasons. Precision agriculture also permits the company to determine the exact day upon which to begin the harvest of each varietal. “When olives are harvested early their oil content is very low but the flavor of the extra virgin olive oils obtained in this stage is more intense, the polyphenol levels are higher, and the percentage of oleic acid is greater. It is very important to harvest in the exact moment of ripeness. Castilla de Canena has always produced well-balanced early juices, and for this purpose it is essential to determine when to harvest each orchard with great precision,” explains Francisco Vañó, the executive director of Castillo de Canena. 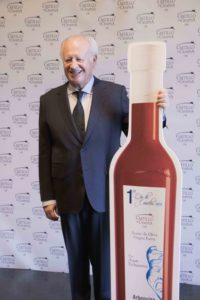 As in each of the previous editions of this line, Castillo de Canena has invited one person from the worlds of culture, art, sport or science —who is also an appreciator of fine olive oil— to design the label that accompanies the characteristic cherry-red bottle of this oil. In previous editions personalities like Sara Navarro, Enrique Ponce, Joaquín Berao, Ainhoa Arteta, Manolo Valdés, Pau Gasol, Alejandro Sanz, Fernando Alonso, Roberto Verino, Raphael, Álex de la Iglesia, Sara Baras and Juan Eslava Galán have participated.

On this occasion, Juan Echanove has created the new label, in which he has captured the feelings of an actor before, during and after the experience of acting on stage. “The curtain rises. Butterflies turn in your stomach.  You feel the warm wash of the stage lights. The world focuses its gaze on your essence, your movement before them. Everything is so fragile. You fear you might let them down. You raise your up soul to the heavens, closer and closer still. You seek perfection; you give your life for it. The curtain falls. And then… only then… you rest. Perhaps you dream. Am I referring to the theatre? Of course. But also to oil. From Jaén. From Andalusia,” speaks the actor.

With innumerable and unforgettable performances to his credit in theatre, film and television, Juan Echanove is one of the actors most highly respected by his peers, by critics and by audiences. “I am grateful to the Vañó family for offering me the opportunity to form part of the great Castillo de Canena family. For allowing my overflowing imagination to feel that I too have added my grain of sand to the long process of obtaining this miraculous potion,” says the actor, who on November 22nd will debut at the Infanta Isabel Theatre in Madrid La fiesta del chivo, directed by Carlos Saura and based on the novel by Mario Vargas Llosa.

With over 20 major theatre roles to his name, some of his most recent performances have been Rojo, a work by John Logan in which the actor not only co-starred but also directed, and Sueños, an interpretation of Los Sueños by Francesco de Quevedo, directed by Gerardo Vera. For this performance Echanove won the Ercilla Award for best Male Leading Actor in 2017.

We cannot fail to mention his unforgettable work over more than a decade in the role of Miguel Alcántara in the television series Cuéntame (TVE 2001; 2005-2017). We have also seen him on television in the series Paquita Salas (2019), La zona (2017), UCO (2009) and Turno de oficio (1986). At the moment he is filming the series El Cid for Amazon Prime Video and will soon release the series Desaparecidos (Telecinco). 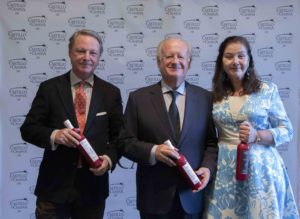 The release of the design created by the actor Juan Echanove for the 14th edition of the limited collection First Day of Harvest coincides with the honors Castillo de Canena has obtained in the most recent edition of the prestigious and internationally recognized guide Flos Olei.

At the cutting edge of sustainability and environmental protection

First Day of Harvest is the extraordinary result of a whole year of effort by the olive-growers, and an homage to the mystique of the very first pressing of the harvest, with all its magic and joy.  In addition, Castillo de Canena is firmly committed to sustainability and environmental protection, recovering the natural equilibrium and diversity of its ecosystem.

“Year after year we produce excellent extra virgin olive oils, with consistency and without exception. Moreover, in recent years we have made enormous steps forward in terms of the sustainability of our property and the adoption of environmentally respectful practices, putting us at the cutting edge in this sense as well. We are continually reducing our water and carbon footprints, and we have managed to regenerate our land by allowing its ecosystem to flourish, recovering the whole food chain and the natural balance of our ecological infrastructures,” highlights Rosa Vañó, director of marketing and sales for Castillo de Canena.  Regarding the new First Day of Harvest oils, Rosa Vañó has pointed out that “Since this idea took shape in 2006, we have always made sure that the individuals we invite to design the label of this special bottle share our values of excellence, perseverance and commitment to good work.  I have known and admired Juan Echanove for a long time, and our delight that he is working with us on this new edition is double: for his extraordinary work as an actor but also his role as a connoiseur of fine foods and ambassador of Spanish products. He is moreover a member of the Royal Gastronomic Academy and the winner of the National Gastronomic Award in 2010. These are qualities that coincide with our philosophy and way of working.”

The best olives in the world, at the optimal moment of ripeness

Castillo de Canena takes great care with the whole process of selection of the very best olives of the Arbequina and Picual varieties, and harvests them at the precise moment of their optimal ripeness.

“This year was very dry, with scarcely any rain, which led to a very varied and staggered ripening time due to the sharp oscillation between high and low temperatures during the veraison and lipogenesis,” says Francisco Vañó. He also highlights that “We have had to wait patiently for the fruits to reach the correct phenological state for obtaining excellent juices.” 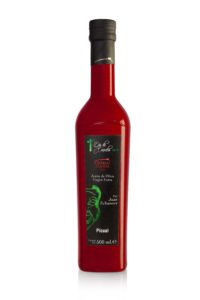 The Picual First Day of Harvest is a fragrant oil with an intense green color, a high concentration of chlorophyll and great expressiveness. Its sensorial profile is very fresh, with notes of green leaves, tomato plant, green apple and very green banana peel. On the palate it has the same expressive stregth as in the nose, with similar herbal tones, notably of tendrils and malva. These notes prevail over a pleasant piquancy, gently perceptible in the throat and evolving into a fresh peppercorn note, with a slight bitterness and discreet astringency that reminds us of nettle. This is a velvety juice, very persistent in the mouth and structurally well-balanced. 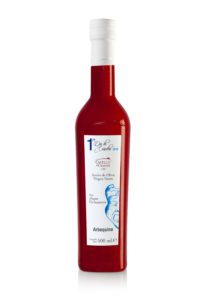 The Arbequino First Day of Harvest is a pale green oil, bright with golden hues. Its organoleptic profile is complex and intense. Sensorially, it offers a very fresh olive note, in which green grass and newly-cut hay stand out at the front, with green fruit and wildflower. In the mouth it enters quickly, confirming the earlier notes with green grass, green almond and an array of fruit (green apple, banana and pear). Its bitterness and piquancy are mild and balanced. It is a very fresh juice, with an anise aftertaste. Elegant, well structured and persistent.

As Francisco Vañó has pointed out, “The First Day of Harvest—both Arbequino and Picual—are oils that come from specially selected orchards on our property: the Cañada Luenga Centro for the Picual First Day and The Sunflowers for the Arbequino First Day.”

This fourteenth edition of Castillo de Canena’s First Day of Harvest line will be present in over 50 countries—principally in Europe, the United States, Latin America, Japan and Australia—consolidating its reputation as one of the best extra virgin olive oils in the world, thanks to the constant recognition it has enjoyed.

With an olive-growing history going back to 1780, and a commitment to the care of its own olive orchards of the Picual, Arbequina and Royal varieties, the Vañó family personally oversees every step in the production of their extra virgin olive oil, from the tree all the way to the sales location.

The company enjoys distribution in over 50 countries, such as the United Kingdom, Germany, Russia, the United States, Japan, China, the United Arab Emirates, Mexico and Peru, among others. Its oils have received the highest international awards in the sector.

The company also belongs to the association Grandes Pagos del Olivar, which brings together the best Spanish producers of extra virgin olive oil, producers who opt for limited production of extremely high quality oil, using methods that combine the best of artisanal production with the most advanced technologies.