Today is the International Day of Fight against Breast Cancer and we would like to recall some of the benefits of extra virgin olive oil (EVOO) and how it helps prevent this disease.

Indeed, the winning project of Luis Vañó Awards 2011 edition was related with this ailment: “Influence of minority components present in virgin olive oil in the prevention of breast cancer. In vitro hydroxytyrosol and tyrosol “study. In their study, researchers at the University of Jaén, Mr. José Juan Gaforio Martínez, Mr. Fernando Warleta Arias & Ms. Cristina Sánchez Quesada focused on analyzing the minority elements of EVOO, particularly hydroxytyrosol and tyrosol, and its  antioxidants effects.

The results of the study indicated that hydroxytyrosol has an antioxidant and protective effect against oxidative damage of human breast cells, so this component should be involved in the preventive effect of EVOO breast cancer. They argue, there are several epidemiological studies showing how populations that regularly consume virgin olive oil experience a reduced risk of developing the disease.

We encourage you to analyze the study of these great researchers. Therefore, in 2012 we published the book under the same title and have launched more than 500 copies. 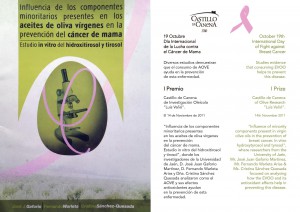 In addition, this information coincides with a new discovery of the organization “Mediterranean Diet Prevention” (PREDIMED), which is based on a study that begun in 2003 on the cardiovascular benefits of the Mediterranean diet, which shows that women who supplement their EVOO Mediterranean diet have a risk 62% lower risk of developing breast cancer than those who take a control diet.

On the other hand, Eduard Escrich, director of the Multidisciplinary Group on Breast Cancer Study, presented a few days ago in Madrid his paper “Olive oils and the fight against cancer,” where once again talking about research that certify how olive oil reduces risk and helps to fight cancer.

We will keep supporting this type of research!